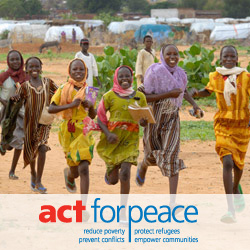 Act For Peace are calling for people to sign their petition to end mandatory detention.  Click on the link below to add your voice.

• There are an estimated 15.2 million refugees, 26 million IDPs and 827,000 asylum seekers waiting to be processed, worldwide. 6.6 million people are considered stateless; that is, they have no country that recognises them as citizens. The UN refers to these people as ‘people of concern’.

• Developing countries, who have the least money available, host 80% of the world’s refugees. This is equivalent to 12.2 million refugees.

• Most of the world’s refugees currently come from Afghanistan and Iraq as a result of the conflict and violence.

• At least half of the world’s ‘people of concern’ are women and girls; 44% of these people are under the age of 18 yrs. Australian Statistics (Refugee Council, 2009):

• Of all the people arriving in Australian waters by boat, over 90% of them have been recognised as genuine refugees.

• Australia is a signatory of the UN Refugee Convention and therefore has the responsibility to offer protection and services to refugees through its Humanitarian Program.

• In countries that are not signatories to the convention – such as India and Indonesia – there is the potential for denying the recognition of refugee status and thus refugees’ rights, leaving them more exposed to human rights abuses.

• Australia has a policy of mandatory detention for all asylum seekers entering Australia without documentation. If refugees have had to flee their country due to persecution, it is often impossible for them to get the necessary documents.

Taste of freedom: a Kurdish winemaker’s journey from Manus Island to the Yarra Valley

Farhad Bandesh made wine in Iran before he was forced to flee, now he is bringing that ancient tradition to the place he hopes to call home
View on Facebook
· Share

Resources Resource Kit We have created a resource kit with all the information you need to educate yourself on the importance of Refugee Week and learn more about how to get involved. RCOA Resource Kit Refugee Week 2021Download 2 weeks ago
View on Facebook
· Share

Join a family-friendly event in your city this Sat

Sydney people are joining rallies all over the country telling the government to return Priya, Nades, Kopi and Tharni #hometobilo

https://aran.net.au/campaigns/no-deportation-to-danger/biloela-family/ #hometobilo Nationwide rallies and vigils in link for the Biloela Family. Some rallies are on tomorrow.